FUNDAMENTALS OF BUOYANCY AND TRANSVERSE STABILITY 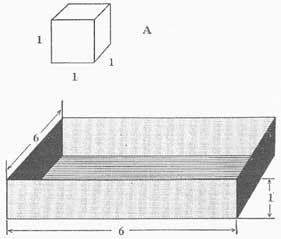 Displacement. Since weight (W) is equal to displacement, it is possible to measure the volume of the underwater body (V) in cubic feet and multiply this volume by the weight of a cubic foot of sea water, in order to find what a ship weighs. This relationship may be written as:

In dealing with ships it is customary to use the long ton of 2,240 pounds; in this text the word "ton" refers to the long ton exclusively.

Displacement varies with draft. As the draft increases, the displacement increases. This is indicated in figure 3-2 by the series of displacements shown for successive draft lines on the midship section of a cruiser. The volume of the underwater body for a given draft line can be measured in the drafting room, using graphic or mathematical means. This is done for a series of drafts throughout the probable range of displacements in which a ship is likely to operate. The values obtained are plotted on a grid, on which feet of draft is measured vertically, and tons displacement horizontally. A smooth line is faired through the points plotted, providing a curve of displacement versus draft, or a displacement curve, as it is generally called. The result is shown in figure 3-3 for a typical cruiser. It is one of the curves of form which are supplied to every Naval ship under the title displacement and other curves