Plate Fields
Plate fields are assessed from a local and global perspective. For example bottom plating can
be assessed with local sea pressure loads applied to the plate field bounded by transverse
framing and longitudinal stiffeners. An assessment of stress, deflection, vibration and
buckling can be made from local considerations. However when the ship is bending due to
global forces, then the bottom plate will be subjected to global stresses and deflections. This
is an analysis that is best performed using Finite Element Modelling.

Simple Beams
Simple beam structures are those that can be analysed using one dimensional analysis and
local loads. An example is a deck beam between two longitudinal girders. The beam is
simply analysed as a one dimensional fixed ended beam with a uniform pressure load. Beam
analysis software or a spread sheet would be used in this case to analyse for stress, deflection
and vibration.

Complex Beam Structures
Complex beam structures are two or three dimensional structures subjected to simple or
combined loading. An example of this is a superstructure comprised of side frames, deck
frames, longitudinal girders and compression posts that is being subjected to deck pressure
and sea pressure simultaneously. This type of analysis is best suited to beam modelling
software and would be assessed for stress, deflection and vibration.

Three Methods of Analysis
Here we will explain the three methods of analysis that can be used and explain when each
type of analysis should be used.

Spreadsheets
The evolution of the spreadsheet over the past 10 years has been quite dramatic. They now
come with many built in functions and are very user friendly. Spreadsheets are most
commonly used for the first set of local calculations to the class society rules. They can also
be used for simple one dimensional beam calculations as the formulas are quite
straightforward and easy to write in a spreadsheet format.
There are two main problems with using spreadsheets. Firstly they are difficult to debug and
modify as the formulas use cell references instead of symbols. When if statement logic is
needed to perform the calculations, they can be very difficult to debug or modify when the
rules change. The second and most concerning in a large office is that they are easy to copy
and modify. The temptation for designers to ‘customise’ a spreadsheet that already exists is
sometimes too tempting. A well meaning designer can easily modify a spreadsheet and
unintentionally introduce an error into it. Passwords can be used to lock them but they are
very easy to get around these days.
An alternative would be to use the software issued by the class societies, or use a
programming language to write a program that can not be modified and is modular for easy
debugging and modification. This can however be very time consuming so most designers
use spreadsheets. In this case you should consider putting procedures in place to ensure that
they are not tampered with.

Beam Modelling
When considering a one dimensional beam such as a fixed ended beam with a uniformly
distributed load, the decision between using a spreadsheet or a beam modelling program is
really one of personal choice. The time taken to use the spreadsheet or build a small beam
model will slightly favour the spreadsheet. Many designers however prefer to build a beam
model using dedicated beam analysis software such as Multiframe. The reason for this is that
spreadsheets are usually limited to giving maximum stress and deflection values however
with beam modelling software, you get much more than maximum stress and deflection. You
get the stress and deflection at any point along the beam, a visual display of how the beam
will behave, reaction moments and forces at the ends of the beams (which are useful for weld
calculations). Also with the press of a button, you can calculate the modal frequencies of the
beam.
However when it comes to two or three dimensional models, or a one dimensional model with
a complex load condition, beam modelling software is by far your best choice. For example
consider the 01 Deck beam of the midship section shown below. 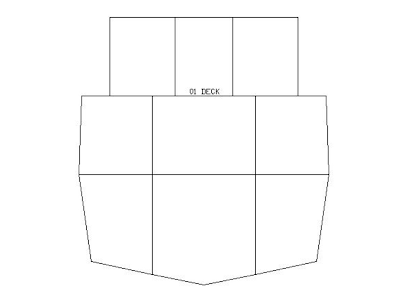 At first glance it looks quite simple however once you look deeper it is actually a complex
calculation.
Firstly the beam has different rule pressure values for inside and outside. Then there is the
offset between the upper and lower pillars. The load distributed from the roof must also be
included as point loads at the pillar base and cabin side locations. Additionally the pillar
under the deck also means that part of the beam has its vertical deflection restricted so this
must be approximated by a simple support making the beam statically indeterminate. It is
possible to manually calculate this beam problem however it will require that a very lengthy
set of calculations be made, which then need to be independently checked.