Distress signals or calls for assistance are made if required in accordance with Australian and international regulations and conventions.


Distress signals or calls for assistance are made if required in accordance with Australian and international regulations and conventions.
Radiotelephony priority calls are the most commonly used method of raising a general alarm; the progressive levels described as distress (MAYDAY), urgency (PAN PAN) and safety (SECURITE). Advances in radio technology has greatly enhanced the capability to alert for assistance and is considered separately in
element two, “Establish and maintain radio-communications”.
International Distress signals:
The International Regulations for Preventing Collision at Sea identifies distress is a situation of grave and imminent danger to a vessel or her occupants. A variety signalling methods, used singly or in combination, are approved for vessels and aircraft that oblige a Master to assist another in distress. False or deceptive distress signals are illegal. 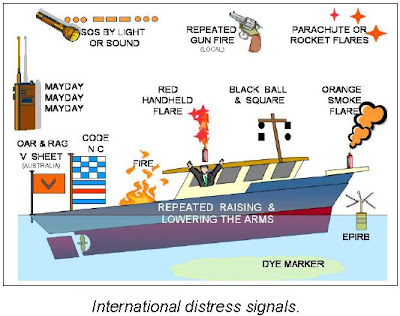 Distress messages:
The position, direction and distance may be properly described in Latitude and Longitude, true bearings and nautical miles by seafarers, but can be more casually indicated by land based observers. If in doubt, rescuers must investigate further, but are ultimately obliged to respond.
Priority Calls:
Radiotelephony priority calls are the most commonly used method of raising a general alarm; the progressive levels described by as distress (MAYDAY), urgency
(PAN PAN) and safety (SECURITE).

Marine Radio Alarm Signal- With the full implementation of the GMDSS the
automatic 2182 kHz alarm devices are no longer required. However, some maritime communications stations may still use the distinct warbling sound voice alarm signal
to draw attention to a distress broadcast. Merchant shipping complying with the
SOLAS now guard the Digital Selective Calling (DSC) distress frequencies.
RTF Distress Signal- The distress signal is used to indicate that a craft or person is
threatened by grave and imminent danger and requires immediate assistance. It has
precedence over all other communications. The distress message is preceded by the
word MAYDAY spoken three times.
RTF Urgency Signal- The urgency signal is used to indicate that the calling station
has a very urgent message to transmit covering the safety of a ship, aircraft or
person. It has precedence over all other communications, except distress traffic. The
urgency message is preceded by the words ’PAN PAN’ spoken three times.
Safety Signal- The safety signal indicates that the station is about to transmit a
message concerning the safety of navigation or providing an important
meteorological warning. The safety message is preceded by the word ’SECURlTE’
spoken three times. All stations hearing either the urgency or safety signals shall not
make any transmissions that might interfere with those signals.