Stability is the tendency of a vessel to rotate one way or the other when forcibly inclined. Stability can be broken down into several categories, each of which are alternatively emphasized in designing and operating Navy and Coast Guard ships.


When the ship's hull is made heavier, the drafts increase as the ship sits deeper in the water. "B" will move up.

When the ship's hull is lightened, the drafts decrease as the ship sits shallower in the water. "B" will move down.

THE STABILITY TRIANGLE
When a ship is inclined, the center of buoyancy shifts off centerline while the center of gravity remains in the same location. Since the forces of buoyancy and gravity are equal and act along parallel lines, but in opposite directions, a rotation is developed. This is called a couple, two moments acting simultaneously to produce rotation. This rotation returns the ship to where the forces of buoyancy and gravity balance out.

Using the Sine function to solve for the righting arm:

A destroyer displaces 6000 LT and has a righting arm of 2.4 FT when inclined to 40 degrees. What is the ships Righting Moment?

The positions of Gravity and the Metacenter will indicate the initial stability of a ship. Following damage, the ship will assume one of the following three stability conditions:

When a ship is inclined through all angles of heel, and the righting arm for each angle is measured, the statical stability curve is produced. This curve is a "snapshot" of the ship's stability at that particular loading condition.


Much information can be obtained from this curve, including:

Range of Stability: This ship will generate Righting Arms when inclined from 0o to approximately 74o. (This curve usually assumes that the entire superstructure is watertight.)
Maximum Righting Arm: The largest separation between the forces of buoyancy and gravity. This is where the ship exerts the most energy to right itself.
Angle of Maximum Righting Arm: The angle of inclination where the maximum Righting Arm occurs.
Danger Angle: One half the angle of the maximum Righting Arm.
SHIP'S HULL MARKINGS
Calculative Draft Marks
Used for determining displacement and other properties of the ship for stability and damage control. These draft marks indicate the depth of the keel (baseline) below the waterline.
Two possible marking systems:
a. Roman numerals 3" in height (prior to 1972)
b. Arabic numerals 6" in height


Navigational Draft Marks
Ships operating drafts. These draft marks include the depth of any projections below the keel of the ship.
a. Arabic numerals 6" in height


Limiting Draft Marks
"...installed on those ships whose limiting displacements are known. As limiting displacements are determined, such markings will be installed. If such drafts are exceeded, it means jeopardizing the ship's ability to survive damage or heavy weather." (NSTM 079 - 14.26)
Limiting drafts are assigned to maintain reserve buoyancy (freeboard) prior to damage, and to prevent excessive hull stresses as a result of overloading. 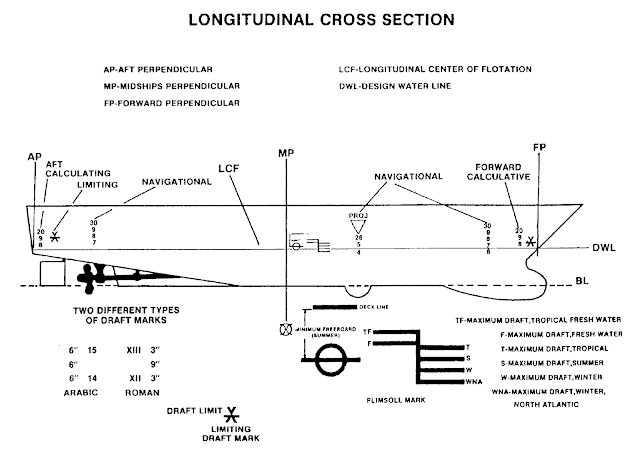 DRAFT DIAGRAM AND FUNCTIONS OF FORM


The Draft Diagram is a nomogram located in section II(a) of the Damage Control Book. Each ship platform will have its own Draft Diagram and it may vary between individual ships. It is used for determining the ships displacement, as well as other properties of the ship, including:
- Moment to Trim One Inch (MT1")
- Tons per Inch Immersion (TPI)
- Height of Metacenter (KM)
- Longitudinal Center of Flotation (LCF)
- Longitudinal Center of Buoyancy (LCB)Instructions for use:4. MT1", TPI, KM, and LCB are determined using LINE #2.
Example: 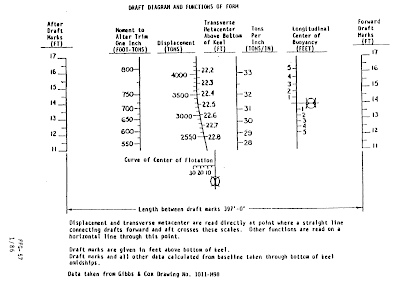 
The Cross Curves Of Stability are used to determine the length of the righting arm at any angle of inclination for a given displacement. Using the ship's displacement (from the Draft Diagram and Functions of Form) a statical stability curve for the ship can be constructed.
Instructions for use: