A container ship has large openings in the upper deck and a high warping stress is
expected at the corners of the openings due to the lack of torsional rigidity. To keep
the necessary torsional rigidity, the double hull side structure is usually applied as a
torsion box in the upper part of a large container ship.
The torsional strength depends on the enclosed cross-sectional area of such
plates, as shown in Fig. 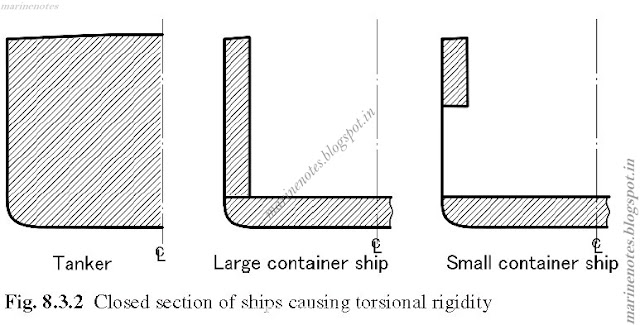 by hatching. However due to design limitation, a container
ship cannot usually have enough cross-sectional area, and the designer has no
other way but to increase the surrounding plate thickness.


TORSION : When any body is subject to a twisting moment which is
commonly referred to as torque, that body is said to be in ‘torsion’. A ship
heading obliquely (45!) to a wave will be subjected to righting moments of
opposite direction at its ends twisting the hull and putting it in ‘torsion’. In
most ships these torsional moments and stresses are negligible but in ships
with extremely wide and long deck openings they are significant. A particular
example is the larger container ship where at the topsides a heavy torsion box
girder structure including the upper deck is provided to accommodate the
torsional stresses (see Figures ). 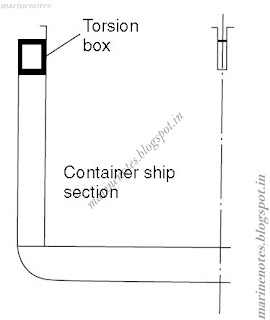 In a container ship the hatch openings are quite big with only a marginal distance on main deck of about 1.5 ft between the hatch opening and the shide shell. This is done so as to maximise the space for stowing containers as they cant be stowed correctly once inside the hold which is not the case with bulk carriers.
Now, the ship is always in motion which leads to a racking effect as well as a diagonal movement which produces a torsion on the main deck. Since the breadth of the main deck plating in way of the hatch openings is less, there is seriuos concentration of stresses there which cause cracking of the deck plating.
In order to prevent the material failure, torsion boxes are fitted with welded joints on the side shell as well as on the deck plating which prevent the torsion produced by twisting.