BASIC DEFINITIONS which you have to know before working as an engineer.

The following terms have to be understood before the basics of engine technology can be grasped. The good
news is that you probably are familiar with many of them. But be careful because these defi nitions may be
slightly different from those you are familiar with.
Engine. A machine that converts one energy form to another form of energy.
Heat engine. An engine that converts the potential heat energy of a combustible fuel into mechanical work. The diesel is a heat engine that functions by converting the heat energy of diesel fuel into mechanical work at its fl ywheel.
Internal combustion engine. A heat engine in which the combustion of fuel is contained within a cylinder. Differentiated from a steam engine in which the fuel is combusted outside of the engine.
Diesel engine. An internal combustion engine in which the cylinder fuel air charge is ignited by the heat of compression.
Kinetic energy. The energy of motion. When a heat engine attempts to convert the energy available in a fuel to mechanical work some heat losses result. Kinetic energy describes that percentage of the potential energy of the fuel that actually gets converted to usable mechanical energy.
Top dead center (TDC). The uppermost point of the piston travel in an engine cylinder. 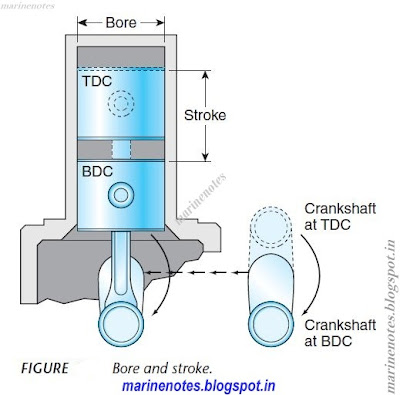 Bottom dead center (BDC). The lowest point of piston travel in the engine cylinder.
Before top dead center (BTDC). Any point of piston travel through its upstroke.
After top dead center (ATDC). A point of piston travel through its downstroke.
Bore. The diameter of a cylinder. Bore is expressed as the piston sectional area over which cylinder pressures act. The bore dimension in an engine cylinder is identified in Figure.
Stroke. The distance through which a piston travels from BDC to TDC. Stroke is established by the crank
throw offset; that is, the distance from the crankshaft centerline to the throw centerline multiplied by 2 equals
the stroke dimension. Figure identifies the bore and stroke dimensions in an engine cylinder.
Swept volume. The volume displaced by the piston in the cylinder as it moves from BDC to TDC. It can be
calculated if both stroke and bore are known.
Clearance volume. The remaining volume in an engine cylinder when the piston is at the top of its travel or
TDC. Clearance volume influences actual compression temperatures and cylinder breathing effi ciencies. The clearance volume on older indirect injection (IDI) diesel engines was considerable but it is much less on today’s direct-injected (DI) engines.
Cylinder volume. The total volume in the cylinder when the piston is at BDC: swept volume plus clearance
volume.
Engine displacement. The swept volume of all the engine cylinders expressed in cubic inches or cubic
centimeters/liters.
Displacement = bore * bore * stroke * 0.7854 * number of cylinders 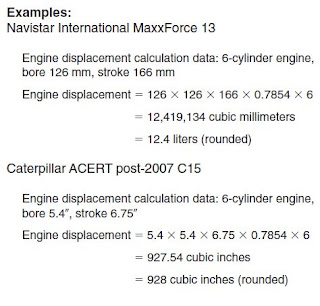 Square engine. The term used to describe an engine in which the cylinder bore diameter is exactly equal to the piston stroke dimension. When bore and stroke values are expressed, bore always appears before stroke.
Oversquare engine. The term used to describe an engine in which the cylinder bore diameter is larger than the stroke dimension. A majority of spark-ignited, gasoline-fueled engines fall into this category, though this could change as direct-injected, gasoline-fueled engines become popular.
Undersquare engine. The term used to describe an engine in which the cylinder bore diameter is smaller than the stroke dimension. Most high-compression diesel engines are undersquare as shown by the displacement that was calculated earlier.
Compression ignition (CI). CI is the acronym commonly used to describe any diesel engine in which the fuel charge is ignited by heat generated on the compression stroke.
Spark ignited (SI). An engine in which the air-fuel charge is ignited by a timed electrical spark. When diesel engine platforms are converted to run natural gas (NG), they require an SI system.
Direct injection (DI). Either a CI or an SI engine in which the fuel charge is injected directly into the engine cylinder rather than to a precombustion chamber or part of the intake manifold. Almost all current dieselengines use DI as well as a new generation of gasolinefueled, SI engines.
Indirect injection (IDI). A CI or an SI engine in which the fuel charge is introduced outside the engine cylinder to a precombustion chamber, cylinder head intake tract, or intake manifold.
Ratio. The quantitative relationship between two values expressed by the number of times one contains the other. The term is commonly used in automotive technology to describe the drive/driven relationships of two
meshed gears, the mechanical advantage of levers, and the cylinder compression ratio.
Compression ratio. A measure of the cylinder volume when the piston is at BDC versus the cylinder volume when the piston is at TDC. Compression ratios in diesel engines fall between 14:1 and 24:1. Current, high-speed, turbocharged truck and bus diesel engines have compression ratios typically between 16:1 and 17:1.
Compression pressure. The actual cylinder pressure developed on the compression stroke. Actual compression pressures developed range from 2.41 MPa (350 psi) to 4.82 MPa (700 psi) in CI engines. The
higher the compression pressure, the more heat developed in the cylinder. Truck diesel engines typically produce compression pressures of  600 psi.
Combustion pressure. The peak pressure developed during the power stroke. In today’s electronically controlled truck diesel engines, combustion pressures may peak at up to five times the compression pressure.
Naturally aspirated (NA). Describes an engine whose only means of inducing air (or air-fuel mixture)
into its cylinders is the low cylinder pressure created by the downstroke of the piston.
Manifold boost. Describes the extent of charge pressure above atmospheric delivered to the cylinders in a turbocharged engine. Most current truck and bus diesel engines are boosted; that is, they are turbocharged.
Volumetric efficiency. A measure of an engine’s breathing effi ciency. It is usually defi ned as the ratio between the volume of actual fresh air taken into the cylinder before the intake valve(s) close versus the
cylinder swept volume. However, properly expressed, volumetric effi ciency is a ratio of masses, not volumes.If the example of a liquid fi lling a pump cylinder is used to explain volumetric effi ciency, it is the
weight of liquid drawn into the pump cylinder in a cycle versus the maximum weight of the liquid the
cylinder could contain. In a diesel engine the fluid being charged to the cylinder is air, which happens
to be compressible. This means that in a turbocharged engine volumetric effi ciency can often exceed
100%. Therefore, another way of defi ning the term is to say that it is the amount of air charged to
the engine cylinder in an actual cycle versus the amount it would contain if it were at atmospheric
pressure. Volumetric effi ciency is usually expressed in percentage terms.
Fire point. The temperature at which a fl ammable liquid gives off suffi cient vapor for continuous combustion to take place. This is also known as ignition temperature.The fi re point or ignition temperature of a diesel fuel is specifi ed by a cetane number (CN). 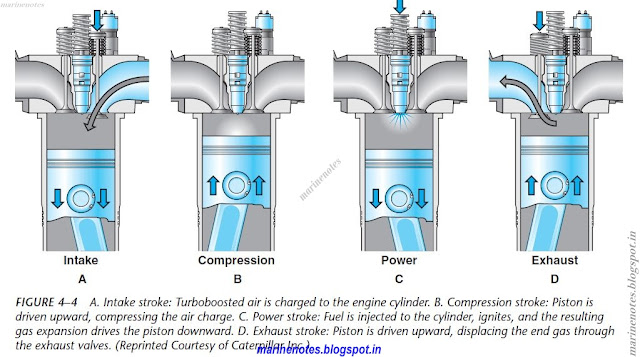