basic terms which you have to know about enigne 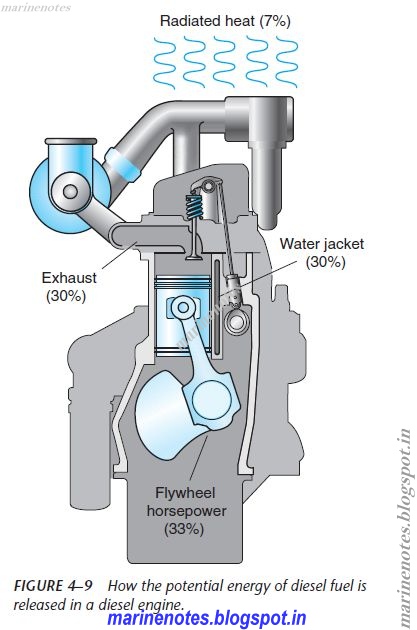 Important Points:
• Most diesel engines are rated by their ability to produce power and torque. The tendency is to rate gasoline-fueled auto engines by their total displacement.
• Diesel engines have high-compression ratios so they tend to be undersquare.
• Almost every medium and large bore highway diesel engine is manifold boosted; that is, it is turbocharged.
• The most common diesel cycle is a four-stroke cycle consisting of four separate strokes of the piston occurring over two revolutions; a complete engine cycle is therefore extended over 720 degrees.
• The two-stroke diesel cycle enables every downstroke of a piston to be a power stroke, so in theory,
it has the potential to produce more power per engine pound than the four-stroke cycle. In practice, this is unobtainable.
• MEP is the average pressure acting on the piston through the four strokes of the cycle. Usually the intake and exhaust strokes are discounted, so MEP is equal to the average pressure acting on the piston through the compression stroke subtracted from the average pressure acting on the piston through the power stroke.
• Ideally, engine fueling should be managed to produce peak cylinder pressures at somewhere around 10 to 20 degrees ATDC when the relative mechanical advantage provided by the crank throw position is low. This means that as cylinder pressure drops through the power stroke, throw mechanical advantage increases, peaking a little before 90 degrees ATDC and providing a smooth unloading of force to the engine fl ywheel.
• An engine attempts to convert the potential heat energy of a fuel into useful mechanical energy: the degree to which it succeeds is rated as thermal efficiency.
• That portion of the heat energy of a fuel not converted to kinetic energy is known as rejected heat. Rejected heat must be dissipated to the atmosphere by means of the engine cooling and exhaust systems.