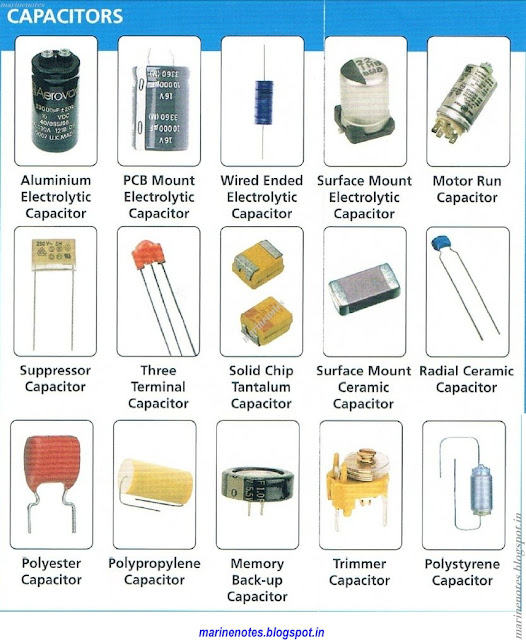 There are many different types of capacitors depending on the type of dielectric material used
between the two electrodes and the shape of the electrodes. The main types are electrolytic,
tantalum, mylar, ceramic and polyester capacitors as shown in Figure

These are large capacitors both in volume and in capacitance value (tens of microfarads). They
look like a cylinder, as shown in Figure 3a. Electrolytic capacitors consist of a pair of aluminum
plates separated by borax paste electrolyte. This provides a large capacitance value in a relatively
small volume. Be careful when using these capacitors. They are polarized which means that the
capacitor is not symmetrical and that you can destroy it when putting a voltage of the wrong
polarity over it. As shown in Figure 3b, one of the terminals has a plus sign (with the largest leg)
(or minus sign - shortest leg) indicating that his terminal always has to be more positive
(negative) than the other one. If you violate this rule, the capacitor will be destroyed and may
even explode! Also capacitors have voltage ratings. Never put a larger voltage over the capacitor
than what is specified on the capacitor. This is also the case for all other capacitor types. Used
for all values above 0.1μF. Electrolytic have lower accuracy and temperature stability than most
other types. It's usually best to only use an electrolytic when no other type can be used, or for allvalues over 100μF. Cheap electrolytic are usually made from plastic and rubber and therefore
melt easily during soldering.
b. Tantalum capacitor
These are smaller capacitors and can have different colors and have the shape of a deformed
oval. Tantalum capacitors are also polarized, as shown in Figure 3b. The positive terminal has
the longest leg and is usually marked by a plus sign. Tantalum capacitors pack a large capacity
into a relatively small and tough package compared to electrolytic, but pay for this in voltage
ratings. They are range from 0.1μF to 100μF.
c. Mylar capacitors
These are usually yellow cylinders. They are not polarized. A variation of polyester capacitors
used where price matters less than performance. High temperature stability and accuracy land
MKT capacitors in higher end audio circuits and power supplies. They range from 1nF to about
10μF. (values over 1μF are quite expensive)
d. Ceramic capacitors
These can have circular shapes (usually orange) or look like little boxes (often blue) as shown in
Figure 3d. Ceramic capacitors work well up to high frequencies in contrast to mylar capacitors.
While they are limited to quite small values, disc ceramics boast small and solid construction
with comparatively high voltage ratings. They range from 1pF to 0.47μF and are not polarised.
This type can often be used to replace a polyester capacitor of the same value.
e. Polyester capacitors
These capacitors usually have a glossy cover and can have a square or oval shape. They are not
polarized. Ranging from 0.01μF to 5μF polyester capacitors have similar properties to disc
ceramics with some larger values and a slightly larger construction.