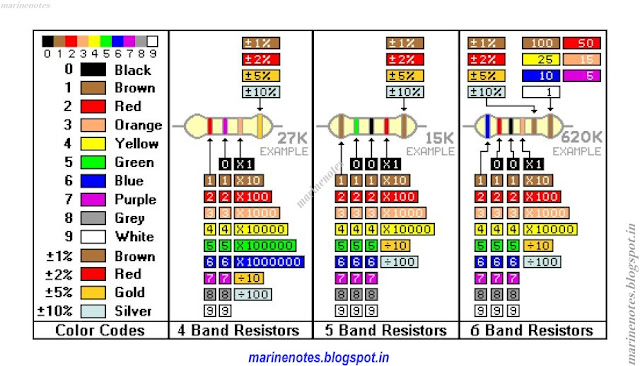 The standard color coding method for resistors uses a different color to represent each number 0 to 9:
black, brown, red, orange, yellow, green, blue, purple, grey, white. On a 4 band resistor, the first two
bands represent the significant digits. On a 5 and 6 band, the first three bands are the significant digits.
The next band represents the multiplier or "decade". As in the above 4 band example, the first two bands
are red and purple, representing 2 and 7. The third band is orange, representing 3 meaning 103 or 1000.
This gives a value of 27 * 1000, or 27000 Ohms. The gold and silver decade bands divide by a power of
10, allowing for values below 10 Ohms. The 5 and 6 band resistors work exactly the same as the 4 band
resistor. They just add one more significant digit. The band after the decade is the tolerance. This tells
how accurate the resistance compared to its specification. The 4 band resistor has a gold tolerance, or 5%,
meaning that the true value of the resistor could be 5% more or less than 27000 Ohms, allowing values
between 25650 to 28350 Ohms. The last band on a 6 band resistor is the temperature coefficient of the
resistor, measured in PPM/C or parts per million per degree Centigrade. Brown (100 PPM/C) are the most
popular, and will work for most reasonable temperature conditions. The others are specially designed for
temperature critical applications.