Easy Ways On How To Test A Fuse With A Multimeter

Easy Ways On How To Test A Fuse With A Multimeter

It's very easy on how to test a fuse. Fuse is a very thin wire, which either melts or vaporizes when current flow through it exceeded the fuse rating. The thin wire of fuse may be made of aluminum, tin-coated copper or nickel. The resulting open in the circuit stops current to flow. In electronic equipment, most fuses are cylindrical glass or ceramic type with a metal cap at each end! The current rating and voltage also can be seen in one of the two metal end caps.

There are two popular physical sizes: 1 – ¼ X ¼ - inch and 5X20mm. The 1 – ¼ X ¼ - inch size is used in many automobiles. You'll find both sizes in many electronic equipment, but the smaller 5 X 20mm has become more common. Fuses are available with current ratings from 1/500 Ampere to hundreds of amperes.

Before showing you on how to test or check a fuse, first you need to understand the purpose of a fuse. The function of fuses is to stop higher than normal current to flow to an electronic circuit-it is designed to protect equipment and save electronic components from being damaged and also stop overheating, which could cause a fire. Sometimes though there were lightning strike on an equipment, you will be surprised that only fuse were damaged and not the power supply section or components.

There are two basic types of fuses which is the fast acting and slow blow type. The fast acting fuse will open very quickly when their particular current rating is exceeded. This is very important for analogue multimeter, which can quickly be destroyed when too much current flows through them, for even a very small amount of time.

Even if you are an experienced repairer, sometimes we do made mistake by accidentally touching the probe to the testing points where it should not be touch! The slow blow fuse has a coiled construction inside the glass. Slow blow fuses are designed to open only on a continued overload, such as a short circuit. The function of the coiled construction is to stop the fuse from blowing on just a temporary current surge.

Don't replace a slow blow fuse in place of a fast acting fuse because it may not open fast enough to prevent components damage under a high current condition. It's not dangerous to substitute a slow blow fuse with a fast-acting fuse, but it will probably open up unnecessarily every now and then when the equipment is first switch on such as when you switch on a Computer Monitor. 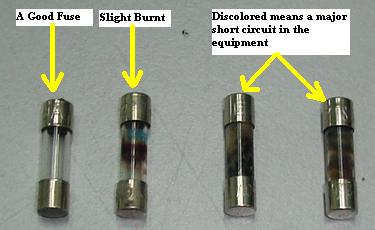 A blown fuse can indicate how severe the short circuit is.

There's a secret for you, a blown fuse can indicate something about the problem. If the glass case of the fuse appears clear or transparent, and if you can still see the slight broken pieces of the fuse element, this means that there's no major short circuit in the circuit. Replacing the fuse with one of the same type and rating usually will bring the equipment back to life again. However, sometimes a replacement might blow the fuse right away when you switch on the equipment. To save the fuse, you can use the series light bulb trick which I'm going to share to you in other article.

Some fuses even die of old age because fuses have lifespan too. But if the inside of the glass fuse is black color or darkened, and there is no trace of the fuse element (the center connector), you know that there was a major short circuit somewhere in the circuit and most probably is the power supply unit. 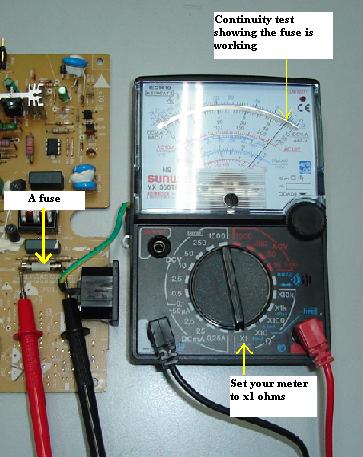 Measuring a fuse on board with an analog multimeter

The common type and current rating of a fuse in a Monitor and Power Supply are slow blow 3.15A to 5 Ampere. Here is the part on how to test a fuse. Switch off the power of the equipment, remove the casing and you will see a fuse usually located in the Ac input area or power supply section. Measure the fuse with a either an analog or a digital multimeter. If you use an analog meter then select the lowest ohms range which is the x1 ohms.

Touch the probes to both end of the fuse. You can check the fuse while it still in circuit. A good fuse reading should showed continuity or read ZERO ohm. A blown fuse is open which will not show any reading on your meter. Testing fuse is one of the simplest tasks in electronic troubleshooting-it's easy and fast. For fuse replacement, use only the same current and voltage ratings as the original one.